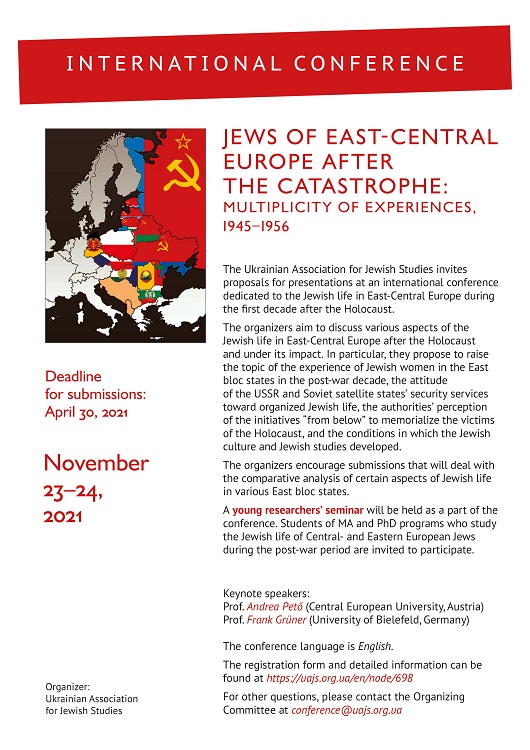 Jews of East-Central Europe after the Catastrophe:
Multiplicity of Experiences, 1945–1956

The Ukrainian Association for Jewish Studies invites proposals for presentations at an international conference dedicated to the Jewish life in East-Central Europe during the first decade after the Holocaust.

The Jews’ experiences of the post-war period in the various countries of East-Central Europe. State antisemitism existed in the USSR as well as in Soviet controlled East Bloc states. However, it manifested itself in various forms and had a varying scale. Displacement of Jews from party apparatuses, from administrative authorities, and from cultural and educational institutions was embodied under different scenarios. The status of Jewish women also significantly differed. It depended of the level of their engagement in social and political life. Various factors influenced on the general situation, i.e. the size of communities, the scale of the local population’s participation in the Holocaust, the preservation of Jewish community structures, activities of Jewish organizations, the agreement of the authorities to let Jews of their countries make Aliyah.

The organizers aim to discuss various aspects of the Jewish life in East-Central Europe after the Holocaust and under the impact of the Holocaust. In particular, they propose to raise the topic of the experience of Jewish women in the East bloc states in the post-war decade, the attitude of the USSR and Soviet satellite states’ security services toward organized Jewish life, the authorities’ perception of the initiatives “from below” to memorialize the victims of the Holocaust, and the conditions in which the Jewish culture and Jewish studies developed.

The organizers encourage submissions that will deal with the comparative analysis of certain aspects of Jewish life in various East bloc states.

A young researchers’ seminar will be held as a part of the conference. Students of MA and PhD programs who study the Jewish life of Central- and Eastern European Jews during the post-war period are invited to participate.

The primary conference language will be English.

Deadline for submissions is extended until May 10, 2021.

The registration form can be found at https://bit.ly/UAJS_conference_2021_en.