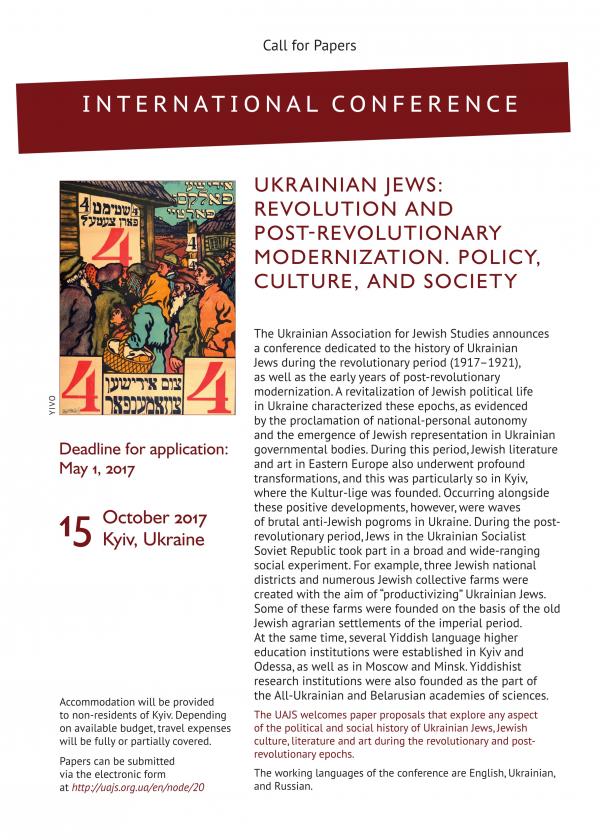 The Ukrainian Association for Jewish Studies announces a conference dedicated to the history of Ukrainian Jews during the revolutionary period (1917–1921), as well as the early years of post-revolutionary modernization. A revitalization of Jewish political life in Ukraine characterized these epochs, as evidenced by the proclamation of national-personal autonomy and the emergence of Jewish representation in Ukrainian governmental bodies. During this period, Jewish literature and art in Eastern Europe also underwent profound transformations, and this was particularly so in Kyiv, where the Kultur-lige was founded. Occurring alongside these positive developments, however, were waves of brutal anti-Jewish pogroms in Ukraine. During the post-revolutionary period, Jews in the Ukrainian Socialist Soviet Republic took part in a broad and wide-ranging social experiment. For example, three Jewish national districts and numerous Jewish collective farms were created with the aim of “productivizing” Ukrainian Jews. Some of these farms were founded on the basis of the old Jewish agrarian settlements of the imperial period. At the same time, several Yiddish language higher education institutions were established in Kyiv and Odessa, as well as in Moscow and Minsk. Yiddishist research institutions were also founded as the part of the All-Ukrainian and Belarusian academies of sciences.

The UAJS welcomes paper proposals that explore any aspect of the political and social history of Ukrainian Jews, Jewish culture, literature and art during the revolutionary and post-revolutionary epochs.

The working languages of the conference are English, Ukrainian, and Russian.

Accommodation will be provided to non-residents of Kyiv. Depending on available budget, travel expenses will be fully or partially covered.