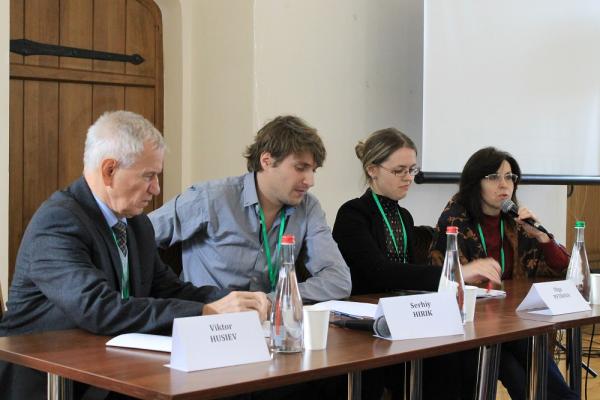 The International conference “Ukrainian Jews: Revolution and Post-Revolutionary Modernization. Policy, Culture, and Society” took place on October 15–16, 2017 at the National University of Kyiv-Mohyla Academy. The conference was organized by the Ukrainian Association for Jewish Studies and the NaUKMA’s Master Program in Jewish Studies. The event brought together the scholars from Austria, Germany, Hungary, Israel, the UK, the USA, as well as from different cities of Ukraine (Kyiv, Chernihiv, Irpin, Kamianets-Podilski, Kharkiv, Poltava, Simferopol, and Uman).

Several talks on understudied topics caused a lively dispute in the audience. That included the lecture by Sofia Grachova (Erfurt) on medical aspect of the Jewish agricultural colonization in the 1920s, the talk by Elena Solominski (Düsseldorf) on the stories told by Jewish children victims of porgroms and recorded by psychiatrist Fishel Shneerson, the presentation by Iryna Etkina (Chernihiv) on the Jewish judges and convicted by the Chernihiv province revolutionary court-martial in 1919–1921, as well as the talk by Ihor Opatsky on the Jews of Lubny during the Ukrainian Revolution.

The conference featured the presentation of the recently published Ukrainian translation of the book A Prayer for the Government: Ukrainians and Jews in Revolutionary Times, 1917–1920 by Henry Abramson.

The round table about the development prospects of academic Jewish Studies in Ukraine and possible topics for upcoming UAJS events concluded the conference.

The event was made possible with the support of the European Association for Jewish Studies and the Nadav Foundation. The report on the conferece can be found on the EAJS website.

The program of the conference (Ukrainian and English versions) can be found on the website of the Ukrainian Association for Jewish Studies.

The photographs from the conference can be found in the album on the UAJS’ Facebook page.