Registration for International Conference “ ‘Revealing of Secrets’: Hasidism and Haskalah in the Ukrainian Lands” 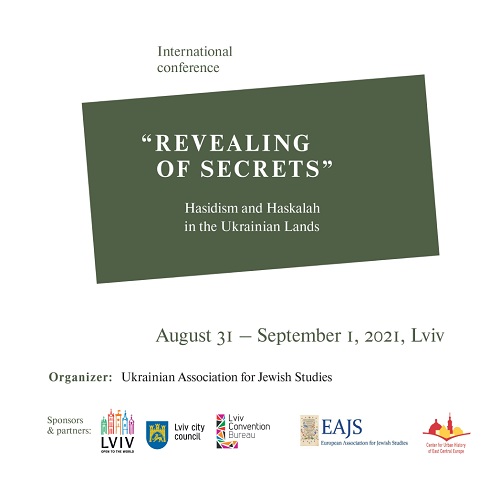 The international conference “‘Revealing of Secrets’: Hasidism and Haskalah in the Ukrainian Lands”, organized by the Ukrainian Association for Jewish Studies, will take place in hybrid format at the Center for Urban History (Lviv, 6 Bohomoltsia St.) on August 31 – September 1, 2021. Scholars from eight countries (Israel, Ukraine, Poland, Germany, Sweden, United Kingdom, USA, and Russia) will participate in the two-day event.

The conference will also include the panel in memory of eminent researcher of Hasidism, Jewish mysticism, and gender history Ada Rapoport-Albert (1945–2020) and the seminar for young scholars (MA and PhD-students).

In addition, the ceremony of the 2021 Marten Feller and Zhanna Kovba UAJS Book Award in Jewish Studies will be held within the conference.

The working language is English (except the book ceremony which will be conducted in Ukrainian). We kindly request media and those who wish to join the event to register here.

The program can be found here.

The event is sponsored by the European Association for Jewish Studies and supported by Lviv Convention Bureau and co-financed by Programme “Support package for development of conference industry in Lviv”.

For any questions, please contact the Organizing Committee at conference@uajs.org.ua.