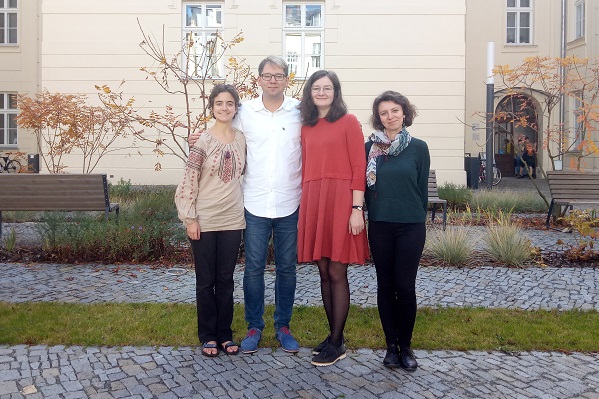 From the Ukrainian side, the presentations were given by the second year student of the MA Program in Jewish Studies at the National University of Kyiv-Mohyla Academy Sofiia Korn, as well as the graduates of the same program, postgraduate students of the Department of History at the NaUKMA Tetiana Borodina and Nadia Ufimtseva (member of the UAJS). The Ukrainian researchers were also presented by Ulyana Kyrchiv, postgraduate student of the Jewish Studies Program at the Ukrainian Catholic University (Lviv).

The President of the UAJS and a co-director of the MA Program in Jewish Studies at the NaUKMA Dr. Vitaly Chernoivanenko was a respondent to three foreign participants of the workshop.

Prof. Marcin Wodzinski (University of Wroclaw) had given a keynote lecture about the research of Hasidic courts of Poland, Ukraine, and Belarus, and the possibilities for scholars provided by usage of the digital humanities’ instruments.

For the Ukrainian speakers, the preparation for the workshop had been started in summer. The presentations to an audience of students and scholars in the field of Jewish Studies from eight countries needed to be conducted in English, which became an important step for the further academic research.

The feedback of the workshop participants from NaUKMA can be found below:

Tetiana Borodina: “My presentation was dedicated to the implementation of the theoretical models from Genocide Studies to the research of the Holocaust in the Poltava region. The topic was 'Holocaust in the Poltava region through the prism of Genocide studies'. At first, I have paid my attention to the contextualization of the Genocide Studies, and then to the events of Holocaust in the Poltava region itself. Besides the main stages of Holocaust, I have focused on the most common model that describes the stages of development of a genocide. That is, on The Ten Stages of Genocide by Gregory H. Stanton, the former President of the International Association of Genocide Scholars. With help of the genocide sociologist Martin Shaw’s groundwork, I have determined levels of the construction of the Jews’ negative image. I greatly appreciate the work of my respondent, Zbyněk Tarant from the University of West Bohemia, for the interesting discussion and helpful commentaries on my presentation. This experience gave me a good motivation for new reflections and research”.

Sofiia Korn: “I have presented my MA thesis on its current stage of development. My topic was 'The historical and cultural context of Sefer ha-Heshek’. Comparing materials that I have sent to the organizers on different stages of preparation to the workshop, I can see how my research has progressed during the last three months. My respondent was Tamás Visi from the Palacký University in Olomouc. He had payed serious attention to my research and gave some valuable advice. The presentations of other participants inspired me to come to important thoughts and conclusions”.

Nadia Ufimtseva: “I have dedicated my presentation to one of the aspects of my future thesis. The topic of the presentation was ‘Practices of reading and book ownership of Kamianets-Podilskyi Jewish community’. The main source for this research is the collection of Jewish printed publications at the funds of the Kamianets-Podilskyi State Historical Museum-Reserve. Through analyzing the condition of the books, the systems of the bookplates and marginalia, I have tried to explore how exactly the owners and the readers had marked personal and institutional property, and what kind of handwritten records they have made. My respondent, Pavel Sládek from the Prague Centre for Jewish Studies at the Charles University, also studies the Jewish book culture, so his feedback and commentaries were very pointful and valuable. He had stressed that, taking into account the amount of the collection, the endeavor to reconstruct the libraries of religious institutions basing on the available materials can barely depict their real structure; still it can produce other interesting results. For me, the participation in this workshop and the communication with scholars were very fruitful. I have had the opportunity to look at my research in a new way, to plan my next steps and future presentations”.

The Ukrainian participants express their gratitude to Lenka Uličná from the Kurt and Ursula Schubert Centre of Jewish Studies at the Palacký University in Olomouc, as well as to the other organizers for the warm, inspiring, and positive atmosphere of the event.

The program of the workshop can be found here.