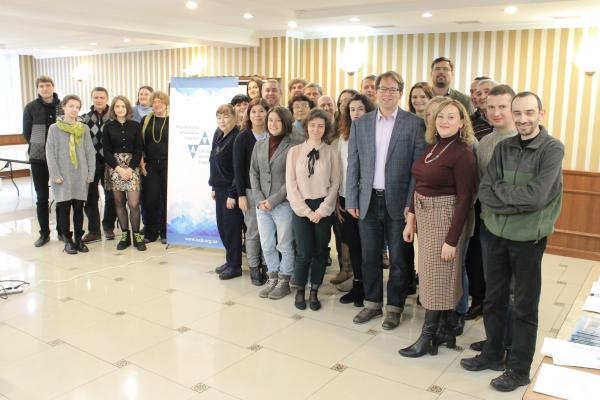 The first general meeting of the Ukrainian Association for Jewish Studies took place on December 15, 2019, at  Podol Inn in Kyiv. The event became a unique encounter Ukrainian specialists in different fields of Jewish Studies, therefore it was decided to organize panels for presentations of UAJS members alongside with the official part for hearing reports and electing new officials.The UAJS President Dr. Vitaly Chernoivanenko spoke about academic and educational activities of the organization in 2015–2019, the annual Judaica Ukrainica journal, and the book series affiliated to it. The secretary Dr. Serhiy Hirik reported on the membership statistic (regional allocation and gender distribution of the new members, number of graduate and postgraduate students among them, etc.)

No UAJS member proposed oneself as a candidate for president or vice president of the Association. The UAJS Vice President in 2015–2019 Dr. Oleksiy Khamray informed the committee about his request not to re-elect him for the second term.

During the discussion two alternative candidates were considered: Dr. Serhiy Hirik for president, and Dr. Yuri Radchenko for vice president. Both researchers refused to accept these nominations.

The voting was held by secret ballot. The nominated candidates have won majority of votes. Thereby, the executive board of the association for 2019–2023 was formed, with Dr. Vitaly Chernoivanenko as President, and Dr. Serhiy Hirik as Vice President.

During the second part of the event, UAJS members reported on their research and educational centers, and initiatives. Dr. Vitaly Chernoivanenko spoke about the Master Program in Jewish Studies at the National University of Kyiv-Mohyla Academy, and Dr. Vladyslava Moskalets presented the Jewish Studies Program of the Ukrainian Catholic University (Lviv). Yuri Radchenko provided information about the activities of the Center for Interethnic Relations in Eastern Europe, led by him. Prof. Maksym Gon made a presentation about the NGO “Mnemonics” in Rivne, and Dr. Anna Mariia Basauri Zuzina shared information about the educational initiatives of the Babyn Yar Holocaust Memorial Center. Dr. Serhiy Hirik presented the UAJS initiative on creating a database of books and articles on academic Jewish Studies. Nadia Ufimtseva and Maksym Martyn spoke about description of Judaica objects in museum collections of Ukraine. Dr. Kateryna Malakhova reported about the outcomes of the first steps of the ESJF project on full mapping of Jewish cemetries in Ukraine.

The last panel included three presentations: “Digital Humanities in a Historical Research” by Tetiana Shyshkina, “Project 'Jewish Shtetls of Ukraine'” by Eugene Shnaider, and “Practices of Public History and Jewish Studies Within a Framework of Informal Education” by Taras Grytsiuk.

The day ended with a lecture-discussion "How and Why Do We Have to Study Jewish Heritage of Ukraine?". It was the closing event of the UAJS series of lectures "Jews of Ukraine: From Old Rus to Independence", which was taking place during 2019 in the Halom Jewish community center. The participants of the event discussed the terms Jewish heritage and Jewish Studies, focusing on the challenges and perspectives that researchers of Jewish Studies face.

The album with photographs from the UAJS General Meeting can be found here.