Public lecture by Robert Schwartzwald “A Burden Upon Their Heads: Hassidim and Quebec’s Debate over ‘Reasonable Accommodation’ and Laïcité” (April 18, 2018) 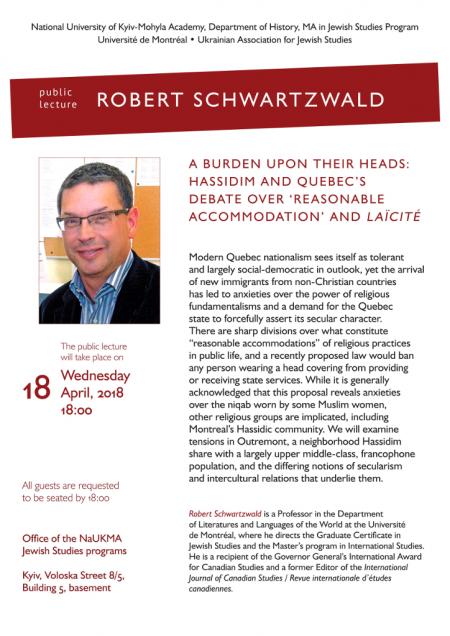 NaUKMA Department of History and MA in Jewish Studies Program, Université de Montréal, and Ukrainian Association for Jewish Studies invite to a public lecture by Robert Schwartzwald “A Burden Upon Their Heads: Hassidim and Quebec’s Debate over ‘Reasonable Accommodation’ and Laïcité” (April 18, 2018).

Modern Quebec nationalism sees itself as tolerant and largely social-democratic in outlook, yet the arrival of new immigrants from non-Christian countries has led to anxieties over the power of religious fundamentalisms and a demand for the Quebec state to forcefully assert its secular character. There are sharp divisions over what constitute “reasonable accommodations” of religious practices in public life, and a recently proposed law would ban any person wearing a head covering from providing or receiving state services. While it is generally acknowledged that this proposal reveals anxieties over the niqab worn by some Muslim women, other religious groups are implicated, including Montreal’s Hassidic community. We will examine tensions in Outremont, a neighborhood Hassidim share with a largely upper middle-class, francophone population, and the differing notions of secularism and intercultural relations that underlie them.