Mini course by Robert Harris "Religion and Politics in Modern Jewish Thought" (May 13–17, 2019) 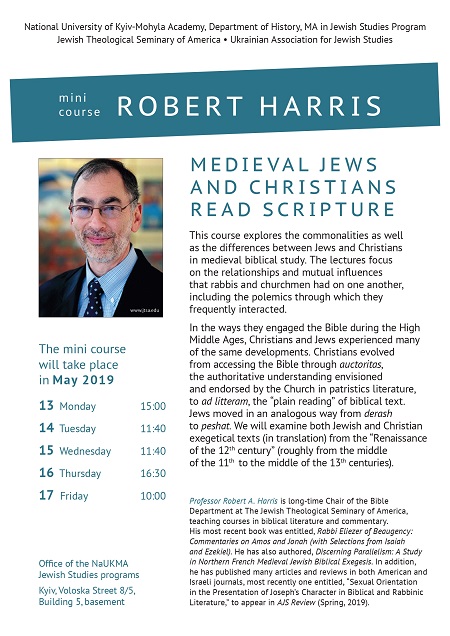 NaUKMA Department of History and MA in Jewish Studies Program, Jewish Theological Seminary of America, and Ukrainian Association for Jewish Studies invite to a mini course by Robert Harris "Religion and Politics in Modern Jewish Thought".

This course explores the commonalities as well as the differences between Jews and Christians in medieval biblical study. The lectures focus on the relationships and mutual influences that rabbis and churchmen had on one another, including the polemics through which they frequently interacted.

In the ways they engaged the Bible during the High Middle Ages, Christians and Jews experienced many of the same developments. Christians evolved from accessing the Bible through auctoritas, the authoritative understanding envisioned and endorsed by the Church in patristics literature, to ad litteram, the “plain reading” of biblical text. Jews moved in an analogous way from derash to peshat. We will examine both Jewish and Christian exegetical texts (in translation) from the “Renaissance of the 12th century” (roughly from the middle of the 11th to the middle of the 13th centuries).

Professor Robert A. Harris is long-time Chair of the Bible Department at The Jewish Theological Seminary of America, teaching courses in biblical literature and commentary. His most recent book was entitled, “Rabbi Eliezer of Beaugency: Commentaries on Amos and Jonah (with Selections from Isaiah and Ezekiel).” He has also authored, “Discerning Parallelism: A Study in Northern French Medieval Jewish Biblical Exegesis.” In addition, he has published many articles and reviews in both American and Israeli journals, most recently one entitled, “Sexual Orientation in the Presentation of Joseph’s Character in Biblical and Rabbinic Literature,” to appear in AJS Review (Spring, 2019).