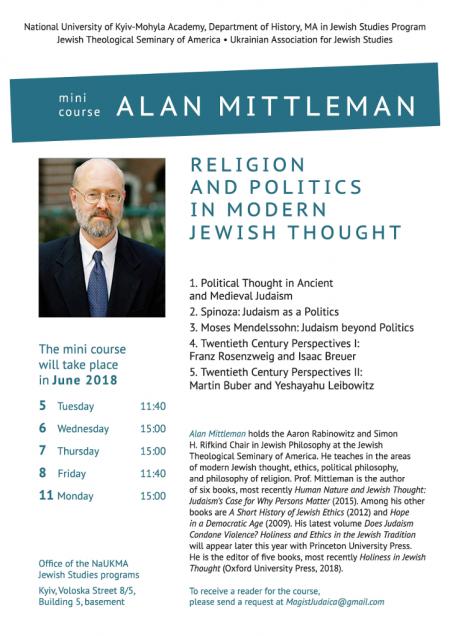 NaUKMA Department of History and MA in Jewish Studies Program, Jewish Theological Seminary of America, and Ukrainian Association for Jewish Studies invite to a mini course by Alan Mittleman “Religion and Politics in Modern Jewish Thought”.

2. Spinoza: Judaism as a Politics

Alan Mittleman holds the Aaron Rabinowitz and Simon H. Rifkind Chair in Jewish Philosophy at the Jewish Theological Seminary of America. He teaches in the areas of modern Jewish thought, ethics, political philosophy, and philosophy of religion. Prof. Mittleman is the author of six books, most recently “Human Nature and Jewish Thought: Judaism’s Case for Why Persons Matter” (2015). Among his other books are “A Short History of Jewish Ethics” (2012) and “Hope in a Democratic Age” (2009). His latest volume “Does Judaism Condone Violence? Holiness and Ethics in the Jewish Tradition” will appear later this year with Princeton University Press. He is the editor of five books, most recently “Holiness in Jewish Thought” (Oxford University Press, 2018).

The mini course will take place in June 2018